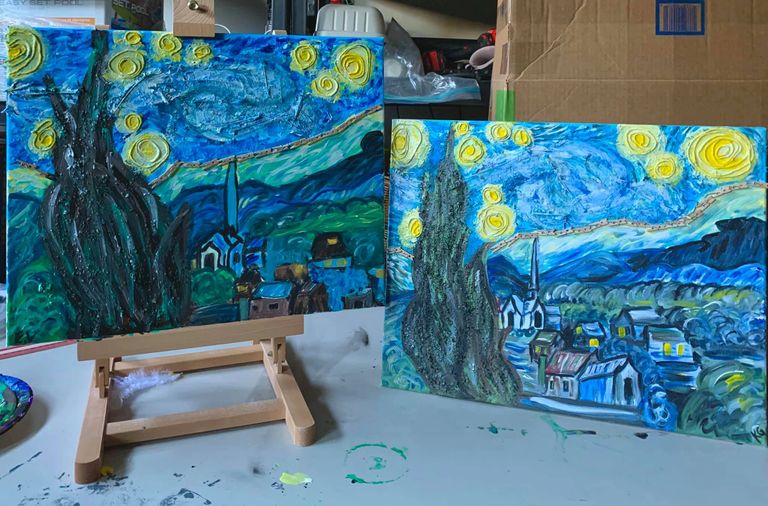 Kayla Garcia resides in Raleigh, North Carolina. She was born in Bay City, Texas, in 1983. She is the oldest of 5 siblings. Kayla was the first person to attend college in her family. She graduated from Meredith College, in Raleigh, NC  in 2014, with a bachelor's degree in studio art and a minor psychology. In 2014, Kayla was hired as a  Medicaid fraud investigator for the state of NC, while working as a full time artist. In August 2019, Kayla became a resident artist at Litmus Gallery & Studios, in Raleigh, NC.

Kayla works primarily in oil and acrylic paints on canvas and uses soft pastels for drawing. She utilizes items such as diamonds, pearls, various types of cloth, and paper mache on canvas to create mixed media pieces. Kayla is also known for sculpting skullheads and portrait busts in clay.

After surviving breast cancer in 2018, Kayla has been inspired by the bonds she shares with her friends, family, and pets. She paints portraits of passed loved ones and animals. She also focuses her attention on more whimsical subjects and designs and is mostly drawn towards pop art and surrealism. When she isnt painting portraits, she also likes to create satirical pieces geared toward current world events and social issues.

Some artists she is most inspired by include Dali, Picasso, Rembrandt, Pollock, and Warhol.

Your support and contributions will enable me to continue to spread art!